On October 10, 2014 the Little Sisters of the Poor received the Franciscan University of Steubenville’s Poverello Medal at a ceremony in the University’s Christ the King Chapel. The medal was awarded to our Congregation for our “dedication to the poor and elderly,” and for our “courageous stand for Catholic values and religious freedom despite challenges from government authorities.”

According to a University press release, the Poverello Medal is Steubenville University's highest non-academic honor, bestowed on organizations and individuals who imitate St. Francis of Assisi, "Il Poverello," (the little poor man) by their strength of character, practical Christian charity, and love for and service to the poor.

Franciscan University President Father Sean O. Sheridan, TOR, presented the Poverello Medal to Mother Provincial Loraine Marie Maguire of the Baltimore Province. Sister Constance Veit, communications director, gave a talk on the spiritualities of St. Francis and Saint Jeanne Jugan and the call to journey toward others in the service of the Gospel.

The Poverello Medal, cast in steel to signify the ideals of Franciscan simplicity and poverty, bears on the front an image of St. Francis giving money to the poor. On the back are the words, "In recognition of great benefactions to humanity, exemplifying in our age the Christ-like spirit of charity which filled the life of St. Francis of Assisi." Past recipients include Dorothy Day, Blessed Teresa of Calcutta and Father Benedict Groeschel, C.F.R. 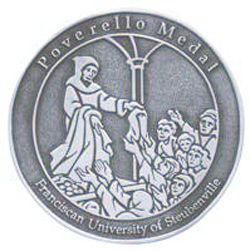 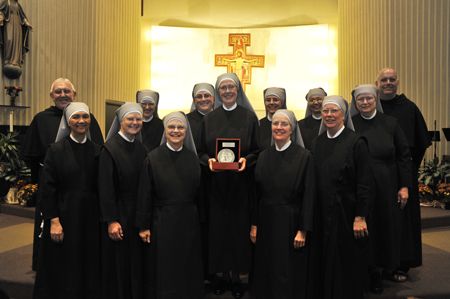 CLICK HERE for a video of the awards ceremony.

CLICK HERE for the text of Sr. Loraine's speech.

CLICK HERE for the text of Sr. Constance's speech.